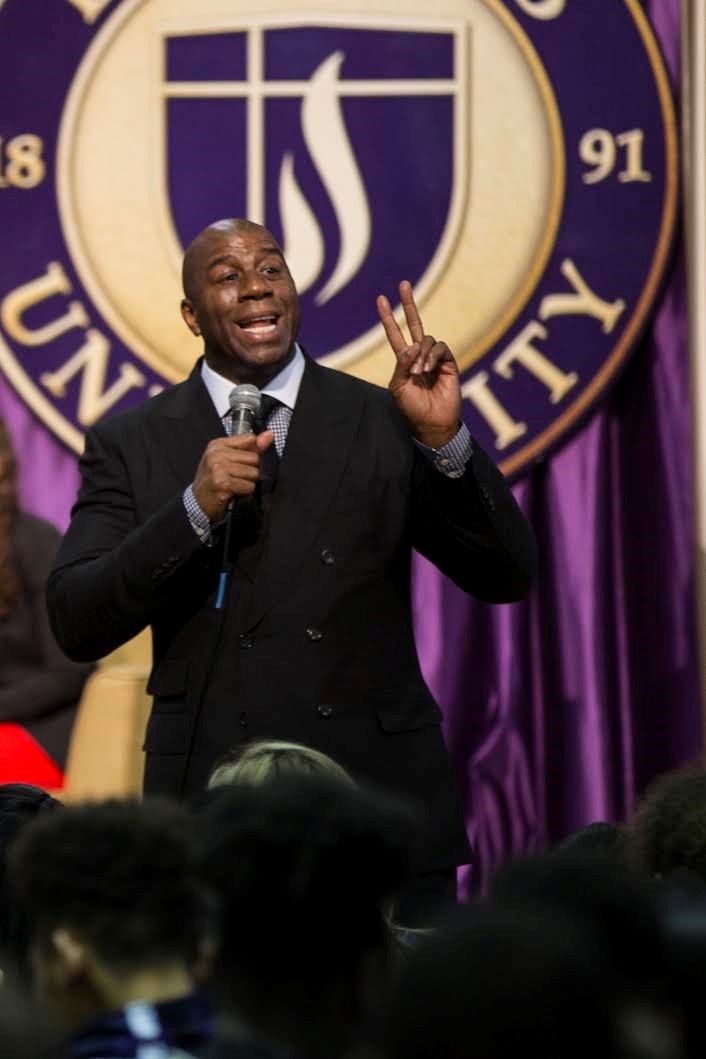 A former basketball star and his wife address students about faith. Plus, a huge donation is made to the university by another big name in the NBA.

After he was diagnosed with HIV 25 years ago, it was Magic Johnson’s Christian faith that saved his marriage, the basketball legend told the Lipscomb University community during a Monday visit to the Nashville, Tenn., campus.

Johnson, who dominated the court during his 13 seasons as point guard for the Los Angeles Lakers, and his wife, Cookie, spoke to students, faculty, staff and donors at the 4,000-student university associated with Churches of Christ. The visit was part of the university’s Imagine 2017 series, titled “Nashville: Prosperity for All Corners of the City.”

Magic Johnson — now president of basketball operations for the National Basketball Association team where he once played — stressed the importance of education and faith as he addressed Lipscomb students, Nashville’s NewsChannel 5

Thank you for sharing your time and story of faith and redemption tonight @cjbycookie & @MagicJohnsonpic.twitter.com/hqKl1J2aV0

— Lipscomb University (@lipscomb) April 4, 2017
“I grew up poor, but I never had poor dreams,” Magic Johnson told the students,  WKRN reports. “Never let anybody define who you will be, and it’s very important.”

Cookie Johnson also spoke about faith and forgiveness during the event. She recently released her memoir, Believing in Magic: My Story of Love, Overcoming Adversity, and Keeping the Faith, which focuses on her marriage, motherhood and Christianity.

The HIV diagnosis, she said “changed the course of our lives forever.” 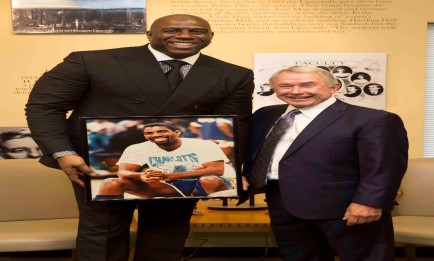 Magic Johnson (holding a picture of himself) and George Shinn at the Imagine 2017 event at Lipscomb University
George Shinn, former owner of the Charlotte Hornets, gave the university a gift of $15 million — an investment in the university’s College of Entertainment and the Arts.

The gift, the largest in the university’s history, will fund a new events center and other initiatives.
Shinn told the audience, “I love what you’re doing at Lipscomb, and I want to thank all of you (donors in the audience) for what you’ve done to support and lift up this university… Be proud of it and please continue to support it.”

This site uses Akismet to reduce spam. Learn how your comment data is processed.